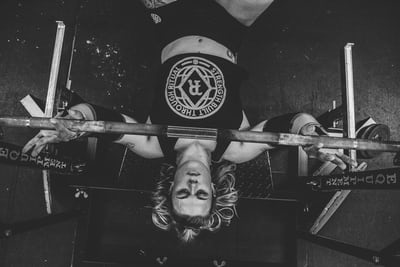 A muscle will produce more force when it is used in integration with the other muscles in its fascially connected chain/sling.

To add to that, if you focus solely on “lifting heavy” weights on a limited range of motion exercise like the bench press (as evident by the picture), you’re packing on unfunctional muscle that can’t reach its full length potential when you need it to, away from the gym.

This can alter the tension relationships between your muscles and cause postural imbalances and injuries/pain further down the road.

It’s important that muscles function as they’re designed to and that exercise respects and enhances those functions.

We’re less about exercising and more about functioning. If you work to enhance the function of a muscle then as a byproduct you’re exercising, because if your muscle doesn’t function the way it should, then the simple act of trying to teach the muscle to perform that function will be a challenge on your muscular and nervous system, and produce the same benefit as exercise but with the added benefit of enhancing your muscle function.

The exercise pictured, the bench press, is not an exercise that you can learn or even relearn function for the pecs because it doesn’t allow the pec muscles to function the way they need to. It only isolates the pec muscles in one plane of motion, and with a limited range of motion that they rarely ever go through in the real world. Think about it, how often when you’re walking down the street or running when you play sports do you drop down to the floor, lie on your back and push weight off your chest? Or even drop to the ground and do a pushup for that matter? The answer is obviously, never! So this is an example of an arbitrary exercise that really doesn’t serve a functional purpose. Maybe for an offensive lineman on a professional football team, but even then they are standing upright when they are pushing someone off of them so the context of the bench press lift doesn’t carry over as much as we think it does.

The bench press lift itself is fairly limited and doesn’t train the rest of the fascial chain/sling that the pec muscle is a part of, so it’s not going to produce as much force or power because it’s just the pec muscle activating by itself.

Try this. Tap your index finger on your desk and feel/listen to the sound it makes when it contacts your desk. Now use your other hand to pull your index finger back (essentially winding it up) and then let your index finger slam down on the desk. It should produce a louder sound and feel more powerful than just tapping by itself. This example is showcasing how weak the muscle is when it works in isolation, but by pulling it back with your other hand you are involving more of the nearby muscles and stretching the fascia that houses it so when you let go it’s ready to produce more force because of more muscle recruitment achieved from a fuller range of motion.

So when you train your pecs, absent of their fascial connections, you’re missing out on the nearby muscles that the pecs attach to resulting in less power output. Additionally you aren’t getting a full range of motion (like your finger pulling back more) to get the pec fibers to stretch more, so that you can get a deeper contraction after the stretch. Although we’ve focused on the pecs as the example, the same can be said of every muscle on your body. The more muscles you can connect with a movement, and completing a larger range of motion will allow better force production and power from that muscle, resulting in overall better function.

When you have been used to a certain way of training and exercising your entire life, whether from high school athletics, body building magazines, commercial gym culture, or YouTube videos it can be hard to grasp the concepts of what real functional training aims to do. So if all of this doesn’t make complete sense, don’t fret, this is on the cutting edge of where the fitness industry is shifting and it challenges the brain and body at the same time. We’re here to help provide clarity and direction for those wanting to workout to enhance their function in life outside of the gym. This approach is different from general exercise to just get a workout in, versus exercising to improve the function of a muscle and a muscle chain/sling as described above. The latter will have the body in a healthier state and improve the overall fitness of the body, as opposed to becoming better at exercises we’re teaching your body how to become better at functions so it can perform in any given scenario.

For more visual examples demonstrating this concept, be sure to follow us on social media, @safunctionalfitness, to see exercise videos showcasing how we train entire muscle chains through entire ranges of motion.