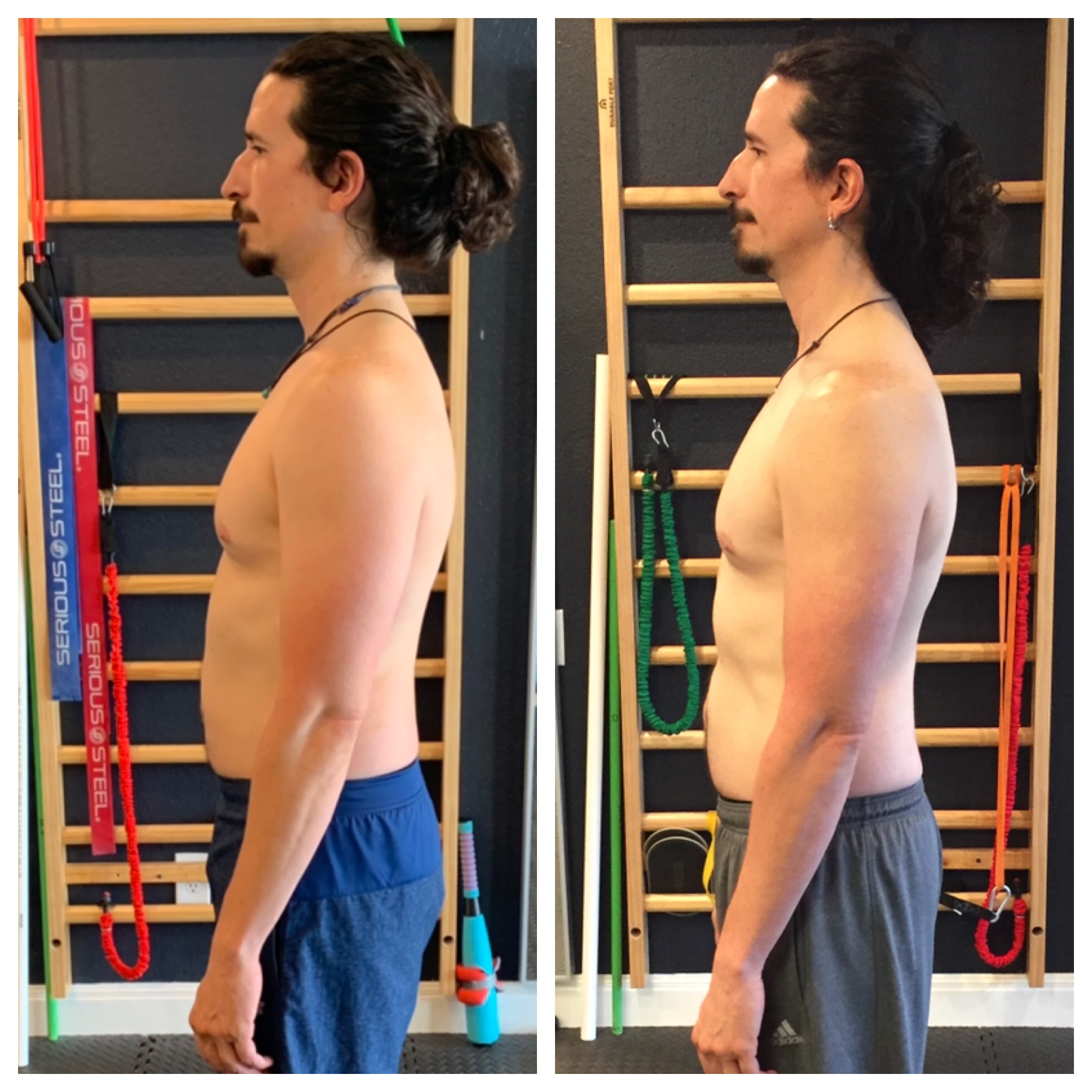 The importance of posture is gaining more recognition as our society becomes more sedentary. Rounded shoulders, hunched back, sway back, and “text neck” impact most of us on a daily basis. Our environment shapes us, literally. If you sit behind a desk all day, you more than likely have rounded shoulders and a forward head posture, because you’re confined to a computer screen for 8 hours a day. Posture is problematic if you’re body gets “stuck” in that particular position and your body can’t get out of it when you move. Whether you’re exercising or grocery shopping, your posture will manifest during movement. Posture training goes deeper than just reminding yourself to stand up straight and pull your shoulders back. In order to truly get yourself out of that “stuck” position and move better, you have to reprogram your nervous system to allow for the long term fix.

Long term improvements to your posture orient from integrated exercise, not training the posture itself. Remember, the nervous system needs to be involved in the process so the body can intrinsically maintain the changes while at rest. So when you’re working all day, your body no longer accepts that familiar “hunched over” position as normal. Now you don’t have to constantly be conscious about sitting up straight with your shoulders back, you’re body will default to that new “stuck” position. Ideally a better position for your body. When the correct exercise stimulus is provided for the body, it will adapt to that stimulus. This is when the nervous system gets involved and connects with the muscular system, as it does in the real world. Exercise that aligns with this notion has the power to reconnect missing links in the muscles and reprogram the nervous system, making you “unstuck,” allowing for long term changes in alignment.

Alignment, posture, structural integrity, stability, however it’s referred to, plays a role in movement and therefore repeat injuries, chronic muscle aches, and nagging joint pain, which then influences movement further. If your alignment is flawed when you’re just standing or sitting, imagine how that “bad posture” will manifest during movement. Your body is going to compensate poorly when it moves leading to the vicious cycle of injury, aches, pains, and eventually lead to even worse movement quality. Whether you’re moving in the gym or around town, your body isn’t adequately  prepared for life and so it breaks down under all the varying forces. From climbing stairs, running, playing with your kids, walking your dog, GRAVITY! If you want more resiliency against these forces then, when you’re in the gym exercising, you have to prepare your body for life outside of the gym. Your body needs a reference to operate better in the real world by utilizing real life Functional Patterns of movement that translate to the way humans were designed to move. Functional Patterns is a training system that respects human evolution and integrates the muscles in accordance with how the muscles are actually, anatomically, connected. When muscles are isolated during exercise, those muscle connections are severed and over time the nervous system recognizes this dysfunctional state as the new normal. Leading to the bodies inefficient relationship with gravity. As you reprogram the nervous system with the right stimulus, from patterns that actually respect the way the bodies connected and tap into those connections during exercise, then better movement manifests in life outside of the gym. Better movement means less compensations and a solution to your nagging aches and pains.

Below are some results one of our clients was able to achieve, after working together once a week for 10 weeks, toward improving his posture for the long run. These changes are only skimming the surface and we have more work to do, but the only cue given during these photos was to “relax, take a deep breath in and let it out.” No other positional cues were given during the photos so we could see how the posture was actually influenced at the neuromuscular level- hence the structural changes even though he’s resting in all the pictures. Even though both poses are relaxed, there are visual differences between the poses because the posture was influenced at a nueromuscular level. In other words, we woke up some muscles that have been asleep (influencing the posture negatively) and put them to work in order to change the structure of the body at a deeper level, rather than just “standing up straight.”

Side view
Increased intra-abdominal pressure (fuller looking belly) so more muscles in the core are being engaged while at rest to support his new posture at an intrinsic level. Decreased forward head posture (height of his nose and angle of his neck) achieved, not from teaching him to pull his head back, but from waking up his deep front line.

Rear view
Overall spinal decompression (less scapular winging, lengthened spinal column) because of overall ribcage decompression. More space between his body and his arms hanging by his side, because his shoulders were pulled out of their chronic internal rotation.

As a result of changing the “alignment” at a neuromuscular level, Rene was able to diminish his lower back pain that he’s been living with for years! Since we aim to lift up the structure of the body during exercise, Rene reported feeling “taller” after every session which is a result of the spine and ribcage decompression, and a more efficient relationship with gravity. Decompression is only achieved at an internal level when the right exercises stimulus is provided, when the body becomes decompressed, the normal resting posture changes. It’s important to note that we did not spend any time after his first session focusing on posture- these changes in alignment were created by focusing on corrective exercise with proper breathing mechanics and body mechanics. It’s all about teaching the muscles to work together in harmony so the body learns how to function as one integrated unit and balance the forces influencing it everyday.

Don’t just change your posture for the short term by pinching your shoulders back and standing up straight. Address the mechanical issues of your body and, in the process, your posture will be changed at a deeper level. Stopping the vicious injury cycle and automatically opening the doors to better movement and pain-free living. Contact us now to set up your consultation and introductory posture assessment. Mention this post and we’ll waive your consultation fee so you can come see what steps you can take toward improving your posture and pain for the long term! 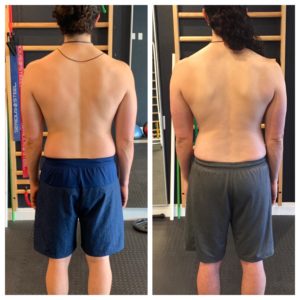 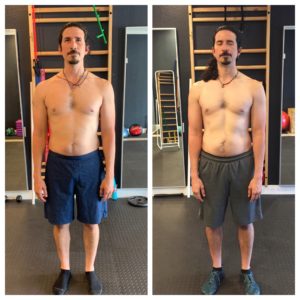