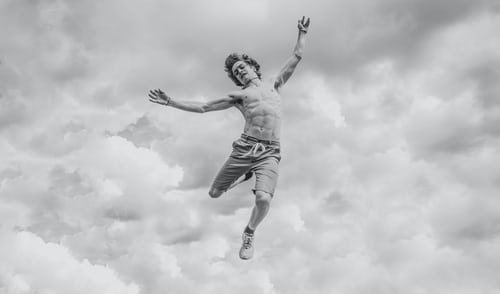 Myofascial Sling Training is a way to train the human body that respects the way it evolved to move. It’s not based on arbitrary exercise tasks, but rather on movement patterns that translate to everyday function. Sling training refers to the Myofascial Sling Systems that connect the upper body with the lower body and are responsible for supporting the body during day to day performance. Whether you’re an elite athlete, amateur golfer, a 5K’er, weekend gardener, construction worker, walking the dogs, playing with the grandkids, and just existing in the real world. Whatever kind of movement you’re doing, your myofascial sling network is producing the movement. In order to move well, you must train the muscles in a manner that reinforce the way the sling systems function. Isolated movement doesn’t fulfill the requirement because when the body moves, it functions as one integrated unit- so total body integration will start to potentiate the muscles involved and teach them how to work together to produce efficient movement.

At first glance sling training is falsely mistaken as exercise that doesn’t accomplish strength gains. However once the proper foundation is built, slinging has the potential to build mass proportionally across entire chains of muscle, create strength during movements that replicate the way we function in reality, provide lengthened potentials (flexibility/mobility) for tight and overactive muscles, and unite multiple systems of the body to work together in harmony and promote a cardiovascular workout as well as strength that manifests in everyday movement. Obviously other modalities promote this as well, the issue that we’ve found is that the traditional means are often temporary gains riddled with aches and pains and are not sustainable.

The more efficiently you can move, the less energy you waste and the more muscles you have working for you at one time to provide a safer way to move your body while minimizing the risk of injury. As humans, we typically walk upright on two feet and other movements branch off of walking patterns, so when we train, we should be training the slings to become better during movements that we go through on a regular basis. While some argue that the squat is a staple movement because children often times squat when they play, they’re not recognizing that the way the squat is typically trained… with a bar on top of your cervical spine, compressing your discs, as you lift heavier and heavier weight, in a repetitious fashion… is damaging. The strength gained in the glutes and lower body is often overshadowed by lower back pain, knee pain, hip pain, or general tightness that, over time, begins to interfere with everyday movement. The squat can be functional, but it’s during movement patterns that promote connectivity between the sling system and the rest of the myofascial meridians. The more connected your muscles are, the less compression you’ll experience in the joints because the muscles are working towards a greater contractile potential to absorb the force.

Our gym offers training that enhances the human body and builds it up, rather than breaking it down through pointless exercise tasks. Instead of coaching you to become better at specific exercises, we teach your body specific exercises that are going to help you perform better in life outside of the gym. Our goal, as trainers, is to create a workout program for you that is sustainable as you age, while still allowing you to make progress and challenge the body as your muscles learn new motor skills to enhance everyday movement.